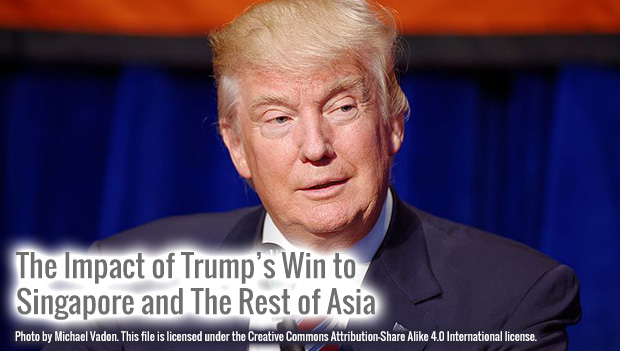 When America went to the vote on November 8th, there was a hush across the world and most noticeably in Asia. During the months-long campaigns both presidential candidates had made comments about this important region and it is no wonder each country had its preferred candidate. When the results were announced the hush became a gasp in Singapore where Hillary Clinton was the preferred candidate.

Who Did Asia Prefer?

It is no clear secret that Donald Trump was not the favorite of Asia. During his speeches the president elect had already indicated he would label China a currency manipulator while also imposing taxes on South Korea, Taiwan among others. From Taiwan to Malaysia where over 200 million Muslims live, Trump’s stance against Muslims seems to have increased resistance towards his candidacy.

During the campaigns, Donald Trump, the president-elect had made remarks that seemed hostile towards Asia. Just before the elections Trump had accused Singapore of stealing American jobs commenting about Baxter. This came as a surprise to a nation that has been one of the most strategic partners with the U.S in the region. The U.S also happens to be one of the country’s biggest economic partners after China.

It was no surprise then that as Lee Hsien Loong congratulated the president elect, he noted that his candidacy was a surprise. This clearly shows the country had not expected Trump to trounce Clinton.

One of the greatest concerns in Asia has been the expected shift in global policy if Trump won and this has come to pass. The Pivot to Asia strategy put in place by Barrack Obama is set to change. This strategy involved increased trade with Asia and redeployment of military assets.

Experts say the US-Singapore relation that has been strong will be affected. There is uncertainty about the direction Trump’s America will take towards existing trade pacts, top of which is the Trans-Pacific Partnership (TPP) that he has criticized as unfair.

In Singapore where the economy is already in the doldrums, the effects of Trump’s victory are more worrying than even in China. Trade protectionism, which is what Trump has campaigned for will mean an even more shrinking market for Singapore technology.

In China, the reaction to a trump presidency is still ambiguous. On one hand, the America first policy which the new president proposes will give China more say in Asia but there is also the threat of job losses if Trump goes after American companies in China and India.